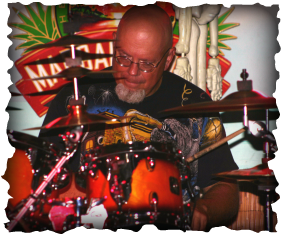 Warren “Honeyhead” Smith – “EVERYTHING you always wanted in a drummer…and less.” This mantra represents my style of continuous, joyful, musical professionalism sustained with uniqueness, reliability and a certain calmness that belies the stereotype of most drummers.  It is the idea that I can perform any gig, any rhythm, any venue or tour, and bring a sense of comfort and stability to the music and the people involved in making it.  I've also made it my life's work to be able to teach a wide variety of genres of music to my students.

Growing up in Wilmington, Delaware, listening to my parent’s jazz records, I started playing at age 4 - banging away on a tin can.  A $49 unmatched drum set soon followed and a professional career began at age 9 when I began playing at local country clubs and society gigs in and around the Wilmington metro area.

Living in the northeast provided me with the opportunity to regularly attend concerts of famed jazz artists including Buddy Rich, who over time became a good friend.  Buddy took me under his wing not only because of my burgeoning drum skills, but also my interest in becoming a jazz composer.

Soon after, I began studying with Jim Chapin, protege of the great Moeller and author of the renowned series of books, “Advanced Techniques for the Modern Drummer – Vol. 1 and 2.” Mr. Chapin’s recommendations led directly to my admission to the University of Miami jazz school and subsequent study with Pulitzer prize nominated composer, Dr. Donald Keats, at the University of Denver.  Following graduation from Miami, Mr. Chapin wrote, “to Warren, who constantly surprises me with his maturity and musicianship.”  Years later, Mr. Chapin wrote in my original study text, “You have fulfilled every hope I have ever had for you. Great."

Overall, my career spans more than 42 years as a professional musician and includes performances with: Pat Metheny, Jaco Pastorius, Ron Miller, Sam Rivers, Siegfried and Roy, Eartha Kitt, Terry Bozzio and many more. I have also worked as a composer and staff musician for Walt Disney World and was the Musical Director for the Blue Knights Drum and Bugle Corps in Denver, CO.

I received my Master of Arts in Music Education at the University of South Florida in 2011.  I have recently relocated to the northeast Georgia mountains and continue to teach and perform both locally and throughout the U.S.